“To commemorate the 2013 centennial of its premiere, Stephen Malinowski and Jay Bacal collaborated on a graphical score of Igor Stravinsky‘s landmark composition The Rite of Spring”

This is great stuff, a really wonderful, intuitive way to watch music – or rather, to watch sound. I need to ask the Mrs what she thinks of this. I have a theory that it impresses the hell out of people with no proper knowledge of musical scores and notation, but those that know their stuff (and she knows her stuff) might find this confusing. It looks like it should behave like a normal stave, but it doesn’t.

As you can see below, it starts simply enough and doesn’t look too dissimilar from what we’d expect. Then it goes a little strange as the frenetic stuff starts. “A magnificent way to see the order in what sounds like chaos.” And that ending, it’s just spot on: I loved being able to see it approach like that. 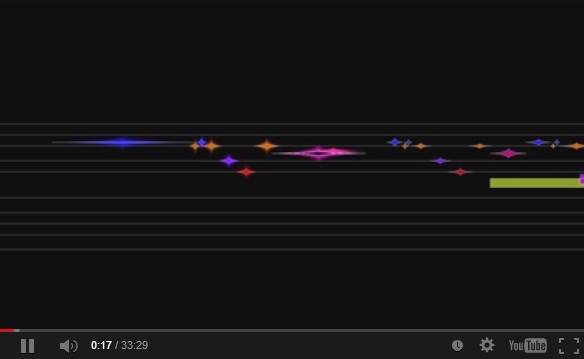