You wouldn’t think that crumbling Soviet sanatoriums would be that photogenic, but these are wonderfully evocative and romantic images from photographer Reginald van de Velde. They hide evidence of terrible, ongoing conflict and suffering, however, as the area deals with competing claims on the territory of Abkhazia, following the breakup of the USSR.

A photographer’s journey through the former spas of Soviet Georgia
“There’s only one way to travel into Abkhazia via Georgia, and that’s via the famous Enguri Bridge. No vehicles are allowed to cross, so you need to walk the bridge by foot or make use of one of the horse carriages,” van de Velde recalls. “The Georgian police held us at the border for three hours for no apparent reason. Once you cross the other side, you bump into a Russian border operated by the military, doing a proper check-up as well.”

Van de Velde didn’t know what to expect once he finally got into Abkhazia. “You enter a country no one ever visits, no one ever sees. You enter this fascinating entity secluded from the outside world. It’s unspoiled, its unknown, it’s subtropical, it’s war-torn, but it’s also incredibly beautiful and pristine,” he recalls. Evidence of violent conflict is still impossible to escape. “All the roads remain severely damaged and potholed, many homes are abandoned, and when you inspect them up close you see the impacts of bullets and shelling.” 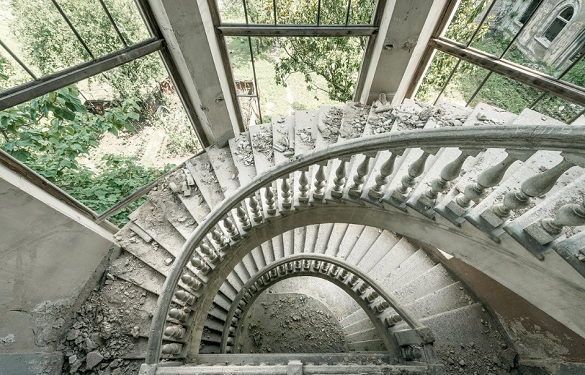 There are more photos on the Atlas Obscura post, as well as on Reginald van de Velde‘s website.