‘Heartbreaking’: fire guts Glasgow School of Art for the second time
She said she witnessed the fire from her flat and saw the start of the blaze in 2014. “This time around I feel numb, like ice, legs like jelly,” Sutherland said. “The fire was immense. People were dodging fist-sized flaming embers last night. All the neighbours were out; we were all worried all the roofs were going up. This area is full of architectural gems. It was terrifying last night. The smell of it and you could feel the heat of it two blocks away.” […]

“It should have been the safest building in Glasgow,” she said. “It’s so ironic that all that money was put back in to restoring the building and celebrating the Mackintosh anniversary. It’s devastating to see when you know what’s in that building.”

More photos from the scene from the Guardian. 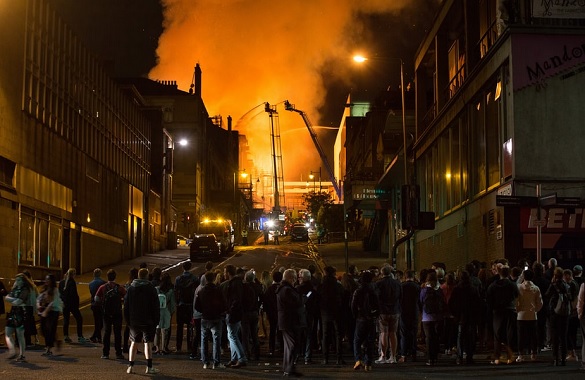 I went to an art school in Newport, South Wales, and they too had a fire this weekend…