I think Richard Polt’s Classic Typewriter Page was the first proper website I read, way back when. I had an Underwood No. 5 and was keen to learn more about it.

I love the fact that the look of that website hasn’t changed at all over the years. It doesn’t need to. Here are some typewriter-related links, starting with some very odd-looking examples.

This 1950s Keaton Music Typewriter is the most vintage and wonderfully impractical thing ever
It is estimated that between six and 24 of these machines are left in existence – and we hear that one was recently up for sale on Etsy for $6,000 (£4,290). Thanks to the fine folk at Musical Toronto for bringing this wonderful thing of oh-my-god-I-want-this-now beauty to our attention.

The Waverley Standard Typewriter, England 1896
The distinguishing aspect of its design is the position of the type bars, which stand vertically behind the platen and swing down towards the typist to strike the top of the platen when typing. This was all about giving visible tying, where one could see what one had just typed. However, with the escape for the paper blocked by the type bars, the carriage design became quite complicated. To get a sheet of paper ready for typing, the bottom edge is pushed back a few inches on the three prongs that are seen under the three hoops of the paper bail in front of the carriage. As one types the paper goes up and around the platen and curls up into a cylinder in the paper bail. The paper is then pulled out sideways.

Wanting to start your own collection?

Man selling $100,000 collection of 600 vintage Smith-Corona typewriters
My collection consists of over 600 typewriter items including the company’s first typewriter in the 1880’s to one of the company’s last typewriters in 2000’s and all models in between, along with all types of items that correspond to the typewriters, including ads, accessories, displays, documents, manuals, photos, shipping crates, etc. Smith Corona’s products are beautiful, interesting, unique, colorful, and when displayed, fun to look at.

They’re not all what they seem, though.

WWII Enigma machine found at flea market sells for $51,000
While the flea-market vendor thought the machine was a unique typewriter, the mathematician knew exactly what he was buying, and felt “compelled to purchase it.”

A prisoner’s only writing machine
I asked Tom Furrier, a typewriter repairman in Arlington, Massachusetts, what he thought of the price of Swintec machines, which he occasionally sells and repairs. “It might as well be a thousand dollars, to some people,” he said. “But I don’t think the cost is outrageous, by any means.” Hundreds of old-fashioned typewriters sit on shelves in Furrier’s shop. I asked him why prisoners couldn’t use refurbished machines like that. “You could almost fashion anything out of these pieces,” he told me, pointing to the steel lever arms of an Underwood. “It would be lethal, I’m sure. Almost any part in this machine.”

… with people doing all sorts of things with them.

A visual history of typewriter art from 1893 to today
Though early typewriter art made its mark, the golden age of the discipline was still decades away — it wasn’t until the concrete poetry movement of the 1950s–1970s, best described as concerned with “poetry that appeals to the eye and not the ear,” that the typewriter became a commonly embraced artistic medium.

Wanting something a little more modern?

Penna: a vintage typewriter-inspired bluetooth keyboard
Three years in the making, PENNA offers the feeling of a mechanical keyboard with keycaps that let you know if you actually typed that letter or not, helping to reduce mistakes. The keyboard will be available with either Diamond Shape Keycaps (rounded corners give a smooth feeling and aim for more accurate typing) or Retro Chrome Keycaps (more like an old typewriter), depending on your preference.

It’s strange to see a ‘typewriter’ with a row of Function keys.

Documentary on the past, present and future of typewriters
There are 3 main stories: one is about a collector of pre-qwerty and rare old typewriters (Martin Howard), another about a struggling typewriter repair shop in Berkeley (California Typewriter), then there’s me and my typewriter vivisection.

Let’s end how we started, with Richard Polt. 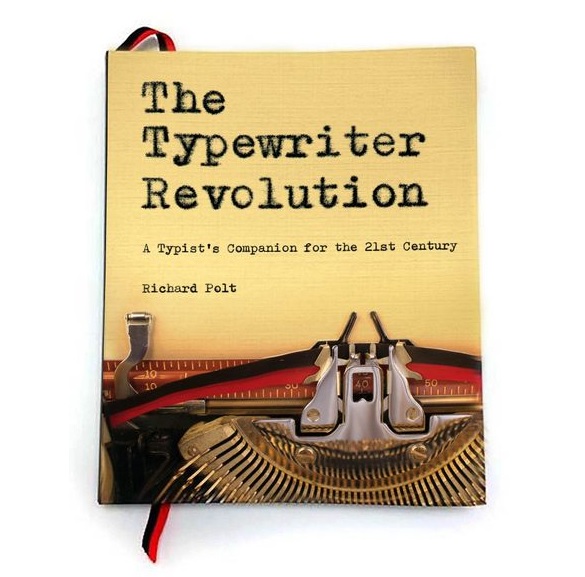 This book was a great birthday present this week. I especially liked the ribbon bookmark.