We took a trip to Kielder Observatory recently. What an incredible place.

Kielder Observatory – A magical & unique visitor attraction
Kielder Observatory is one of the most remarkable places to visit in the whole of the UK. A public astronomical observatory which is second to none, under some of the darkest skies in the world where you’ll find “infinite inspiration” and wonders you could never have imagined!

I had never seen the Milky Way before, but because it was so dark out there we could just about make it out.

Dark-sky status awarded to Northumberland Park area
The International Dark Skies Association (IDA), based in Tucson, Arizona, granted it gold status, which is the highest accolade it can bestow.

Steve Owens, dark skies consultant and chair of the IDA’s development committee, said: “The quality of Northumberland’s night sky, and the huge efforts made by local communities to preserve them, make Northumberland Dark Sky Park a gold tier site, and one of the best places to stargaze in Europe.”

We had booked onto a midnight talk on exoplanets, but before that started we just gazed at the stars — and planets and satellites and perseid meteors. We watched the moon rise and everyone enjoyed taking photos of it through the telescope. 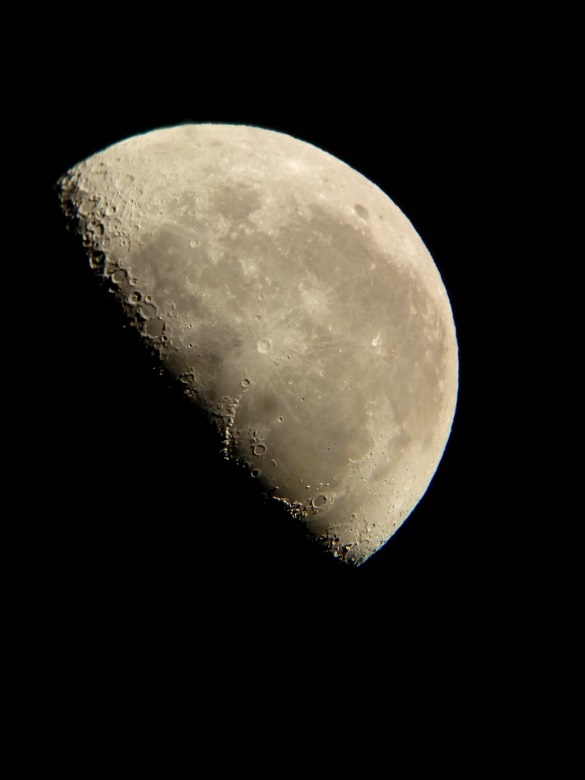 Not bad for a little cameraphone. Here’s another view, courtesy of NASA and Claude Debussy.

Clair de Lune
Vast lunar landscapes set to the aching, shimmering piano of Claude Debussy’s 1905 composition ‘Clair de Lune’ (French for ‘moonlight’) offer an enchanting melding of science and art through the interplay of light, texture and music. The video, which traces the flow of sunlight over the Moon’s surface, was created by NASA’s Scientific Visualization Studio using images captured by the Lunar Reconnaissance Orbiter. It was first shown at a celebration of NASA’s 60th anniversary along with a live performance of Debussy’s music.

The music fits perfectly; not so sure about that recently released movie trailer, though.