As a photography student in the 1970s, Edward Burtynsky was told to find “evidence of man”. He’s still at it, creating what could be called quite a depressing collection of photographs, though this Wired journalist sees them more positively.

The devastating environmental impact of human progress like you’ve never seen it before
By and large, Burtynsky is still at work on that first-year assignment, only now he uses better cameras and criss-crosses the globe. His images are vast and uncanny landscapes of quarries, mines, solar plants, trash piles, deforestation and sprawl – pictures of depletion and desecration that are testament to the collective impact of humankind. Yet Burtynsky’s photos are not depressing. They are reverential and painterly, capturing gargantuan industrial processes in fine detail. 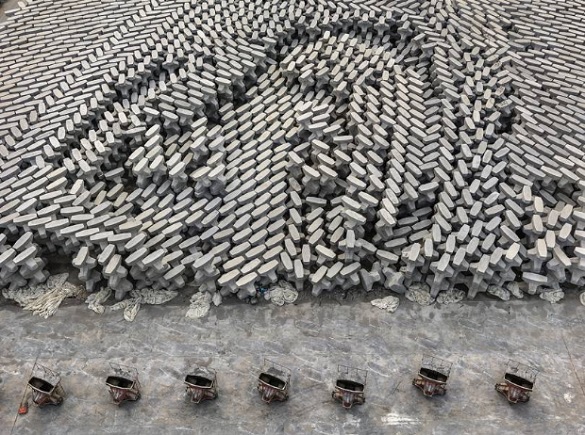 There are many more of his extraordinary photos on this article from the BBC.

Striking photos of human scars on Earth
“Most people would walk by a dump pile and assume that there’s no picture there,” Burtynsky has said. “But there’s always a picture, you just have to go in there and find it.” One of his famous sequences depicts mountains of discarded tires in California. Another shows mountains of poached ivory being burnt. Waves of rock curve into an unsettling symmetry in his photo of Chuquicamata, one of the world’s largest open-pit mines. There is dark irony in his radically anti-idyllic view of the world.

And on a similar theme, some more remarkable images of the impact we have on our environment, from a slightly higher perspective.

These stunning satellite images show how growing cities change the planet
In a satellite image of Las Vegas in 1976, the city still looks relatively small. By 2015, after the population had grown more than six times, another image shows the sprawl of streets, houses, and golf courses into the surrounding desert. In a new book of stunning images of cities shown from above, the picture of Vegas is cropped to include nearby Lake Mead, its primary water source. “You actually see Lake Mead retreat and the city grow,” says Meredith Reba.