The Economist has a very effective, scrolling infographic on the changing pattern of states and companies that are filling up our skies.

The space race is dominated by new contenders
Some 4,500 satellites circle Earth, providing communications services and navigational tools, monitoring weather, observing the universe, spying and doing more besides. Getting them there was once the business of the superpowers’ armed forces and space agencies. Now it is mostly done by companies and the governments of developing countries.

In the past decade the West’s space-launch market has become more competitive thanks to an innovative new entrant, SpaceX. But state-run programmes still lead the way in emerging markets. In 2003 China became the third country to put a person into orbit; India plans to follow suit in 2022. Both sell launch services to private clients. China did legalise private space flight in 2014, but no companies based there have yet reached orbit on their own.

But looking at this, you wonder if there’s any space left up there.

A beehive of satellites
The launch of the first artificial satellite by the then Soviet Union in 1957 marked the beginning of the utilization of space for science and commercial activity. During the Cold War, space was a prime area of competition between the Soviet Union and the U.S.

In 1964 the first TV satellite was launched into a geostationary orbit to transmit the Olympic games from Tokyo. Later, Russian launch activities declined while other nations set up their own space programs. Thus, the number of objects in Earth orbit has increased steadily – by 200 per year on average. 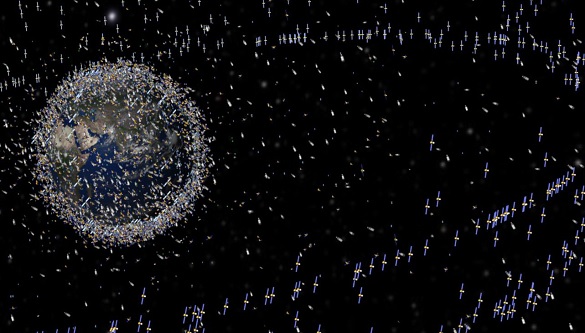 The debris objects shown in the images are an artist’s impression based on actual density data. However, the debris objects are shown at an exaggerated size to make them visible at the scale shown.

Thanks for clearing that up.

This Miscellaneous Details blog is a record of some of the web pages and articles I’ve enjoyed reading, on a range of subjects, in an attempt to remember them and find connections.