Each six months Andy Kirk of Visualising Data highlights some of the significant developments in data visualisation. It’s a great collection, but this one in particular caught my eye.

10 significant visualisation developments: July to December 2018
2. ‘Human Terrain’: A genuinely captivating project from Matt Daniels of ThePudding, ‘Human Terrain’ is a staggeringly detailed, explorable prism map of the world’s population that can trap you into browsing for far longer than you can realistically afford. It evokes memories of a classic graphic from 2006, created by Joe Lertola for Time magazine. There is also a wonderful companion piece, ‘Population Mountains‘, where Matt walks through ‘a story about how to perceive the population of cities’.

When you fly from one part of the world to another, it becomes very quickly apparent just how crowded some places must be, compared to others. 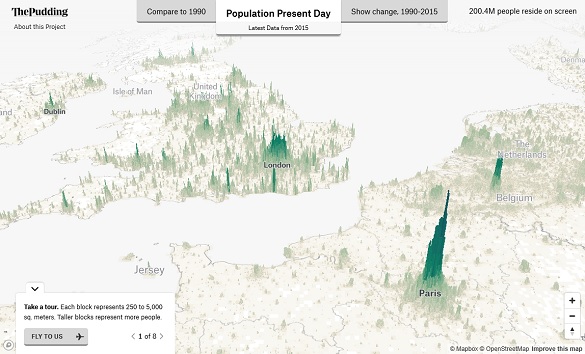 Human Terrain: visualizing the world’s population, in 3D
Kinshasa is now bigger than Paris. Guangzhou, Hong Kong, and Shenzhen are forming an epic, 40 million-person super city. Over the past 30 years, the scale of population change is hard to grasp. How do you even visualize 10 million people? 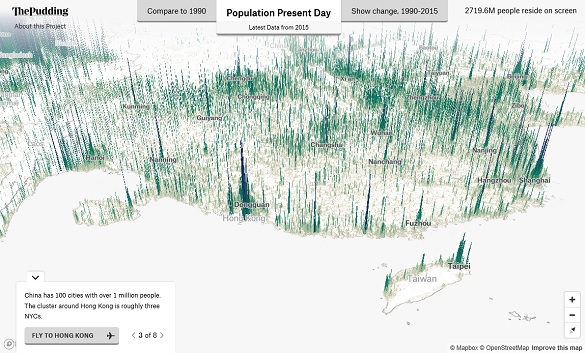 It puts those incredibly dense housing schemes in Hong Kong I mentioned earlier into context, doesn’t it?

Population growth, like charity, starts in the home, so here’s an animated chart on family sizes in the US.

How many kids we have and when we have them
The chart above shows 1,000 timelines, based on data from the National Survey of Family Growth. Each moving dot is a mother. Age is on the horizontal, and with each live birth, the dot moves down a notch. The green bubbles represent the total counts for a given age.

It’s interesting to watch the chart populate. You’ve got to wonder about the stories behind those outliers though.