So black holes are really real, then?

The first photo of a black hole
We have the first photo of a supermassive black hole, from imagery taken two years ago of the elliptical galaxy M87 (in the constellation Virgo) by the Event Horizon Telescope project. The EHT team is a group of 200 scientist that has been working on this project for two decades. The image was created using data captured from radio telescopes from Hawaii to the South Pole and beyond using very long baseline interferometry.

This animation, via the Event Horizon Telescope project website, explains what we’re looking at.

Zooming into a simulated black hole accretion system in M87

Compare that with this image from 1979 (colourised in 1989), “said to be the the first based on data rather than artistic speculation.”

Groundbreaking 1979 visualization of black hole – Boing Boing
“The final black and white “photographic” image was obtained from these patterns. However, lacking at the time of an appropriate drawing software, I had to create it by hand. Using numerical data from the computer, I drew directly on negative Canson paper with black India ink, placing dots more densely where the simulation showed more light – a rather painstaking process!” 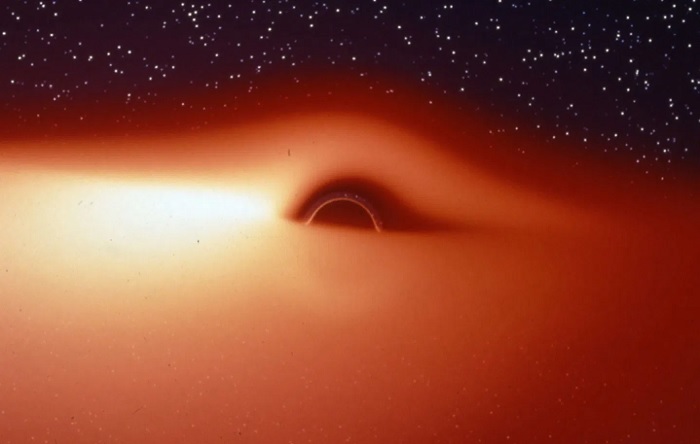 As always with space stuff, I have a problem with scale. This helps enormously, though.

That’s pretty big. But how about these images of Jupiter.

NASA has released new images of Jupiter, taken by the Juno Spacecraft
Favourite comment: “God I wish Vincent van Gogh was alive to see this”

Yes, I can just imagine Van Gogh looking at these with a ‘told you so’ smile on his face. NASA has some more images from their Juno mission.