Another art and AI post, but with a difference. An exhibition at the Dalí Museum in Florida, with a very special guest.

Deepfake Salvador Dalí takes selfies with museum visitors
The exhibition, called Dalí Lives, was made in collaboration with the ad agency Goodby, Silverstein & Partners (GS&P), which made a life-size re-creation of Dalí using the machine learning-powered video editing technique. Using archival footage from interviews, GS&P pulled over 6,000 frames and used 1,000 hours of machine learning to train the AI algorithm on Dalí’s face. His facial expressions were then imposed over an actor with Dalí’s body proportions, and quotes from his interviews and letters were synced with a voice actor who could mimic his unique accent, a mix of French, Spanish, and English.

Behind the Scenes: Dali Lives

Whilst we’re talking of Dalí, let’s go behind the scenes of that famous portrait of him by Philippe Halsman. No flashy, cutting-edge technology this time, just wire, buckets and cats. 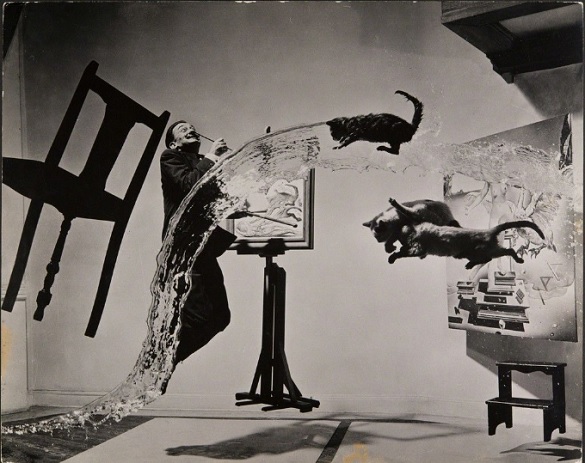 The story behind the surreal photograph of Salvador Dalí and three flying cats
The original, unretouched version of the photo reveals its secrets: An assistant held up the chair on the left side of the frame, wires suspended the easel and the painting, and the footstool was propped up off the floor. But there was no hidden trick to the flying cats or the stream of water. For each take, Halsman’s assistants—including his wife, Yvonne, and one of his daughters, Irene—tossed the cats and the contents of a full bucket across the frame. After each attempt, Halsman developed and printed the film while Irene herded and dried off the cats. The rejected photographs had notes such as “Water splashes Dalí instead of cat” and “Secretary gets into picture.”

Time.com have a great interview with Philippe Halsman’s daughter Irene on what that shoot was like.

The story behind the surrealist ‘Dali Atomicus’ photo
“Philippe would count to four. One, two, three… And the assistants threw the cats and the water. And on four, Dali jumped. My job at the time was to catch the cats and take them to the bathroom and dry them off with a big towel. My father would run upstairs where the darkroom was, develop the film, print it, run downstairs and he’d say not good, bad composition, this was wrong, that was wrong. It took 26 tries to do this. 26 throws, 26 wiping of the floors, and 26 times catching the cats. And then, there it was, finally, this composition.”

Coincidentally, Artnome’s Jason Bailey has been using AI and deep learning to colorize old black-and-white photos of artists, including that one of Dalí’s.

50 famous artists brought to life with AI
When I was growing up, artists, and particularly twentieth century artists, were my heroes. There is something about only ever having seen many of them in black and white that makes them feel mythical and distant. Likewise, something magical happens when you add color to the photo. These icons turn into regular people who you might share a pizza or beer with.