It’s the 50th anniversary of the launch of Apollo 11 today, blasting off on July 16, 1969 to start its three-day trip to the moon.

Apollo 11 moon landing anniversary: NASA legends remember the nerve-wracking moments
“It was a very large crater,” Armstrong told Ed Bradley and “60 Minutes” in 2005. “Steep slopes on the crater, covered with very large rocks about the size of automobiles. That was not the kind of place I wanted to try to make the first landing.”

Armstrong, flying manually, had to improvise. He had roughly one minute of fuel to find a safe place to land … “The tension was through the roof,” said Charlie Duke, also in Mission Control, who was the man telling Armstrong he was flying on fumes. Duke said the tension was so great at Mission Control there was dead silence. “I’d never heard Mission Control so quiet. So that tension, it was palpable. You could feel it.”

Armstrong finally spotted smooth terrain: “And we finally landed with nobody knows exactly how much fuel. Some estimates have it at 20 seconds’ [worth].”

“Houston, Tranquility Base here. The Eagle has landed.”
“Roger, Tranquility. We copy you on the ground. You’ve got a bunch of guys about to turn blue. We’re breathing again. Thanks a lot.”

An absolutely incredible journey. The risks were staggering. It could have all gone very differently.

50 facts about the Apollo 11 moon landing for its 50th anniversary
5. Richard Nixon had a speech prepared in case the Apollo 11 astronauts never came home.
As with many historic undertakings, President Nixon had to prepare for the possibility that a tragedy might occur during the Apollo 11 mission. So his speechwriter, William Safire, wrote two different speeches: one to celebrate the mission’s victory, another titled “In the Event of Moon Disaster.” It stated:

Thankfully, the mission was a success, though some thought the soundtrack could be improved.

Brian Eno’s soundtrack for the Apollo 11 moon landing
In the months that followed, the same few seconds of Neil Armstrong’s small steps played on an endless loop on TV as anchors and journalists offered their analysis and patriotic platitudes as a soundtrack. The experts, he later wrote, “[obscured] the grandeur and strangeness of the event with a patina of down-to-earth chatter.”

In 01983, Eno decided to add his own soundtrack to the momentous event.

It’s not the only moon out there, of course.

The Atlas of Moons
Our solar system collectively hosts nearly 200 known moons, some of which are vibrant worlds in their own right. Take a tour of the major moons in our celestial menagerie, including those that are among the most mystifying—or scientifically intriguing—places in our local neighborhood.

Can’t resist just adding another article here, though I’ve mentioned some of these before.

The greatest photos ever? Why the moon landing shots are artistic masterpieces
The legacy of Earthrise has never stopped growing – and the Earth, as seen by unmanned spacecraft, has never stopped shrinking. When Nasa’s Voyager probe reached the edge of the solar system it turned to take a picture of a tiny Earth alongside its neighbouring planets. The Hubble telescope and its like have shown us a sublime, colourful universe whose light-filled dust clouds are light years across.

Yet the photographs taken by the Apollo 11 astronauts and the handful of humans who followed them remain unique. They are still the only portraits of our species on another world. 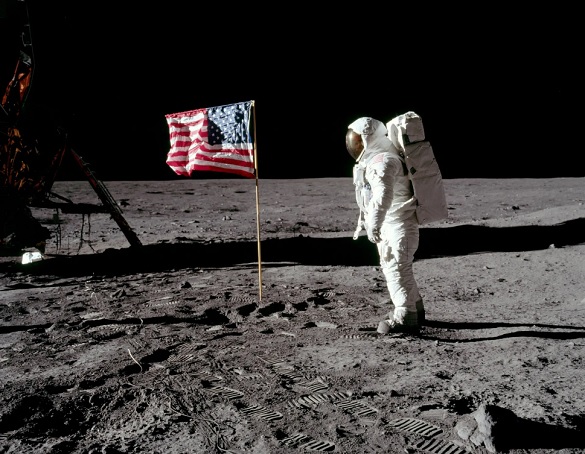 I didn’t realise you could see Buzz Aldrin’s face in that photo. 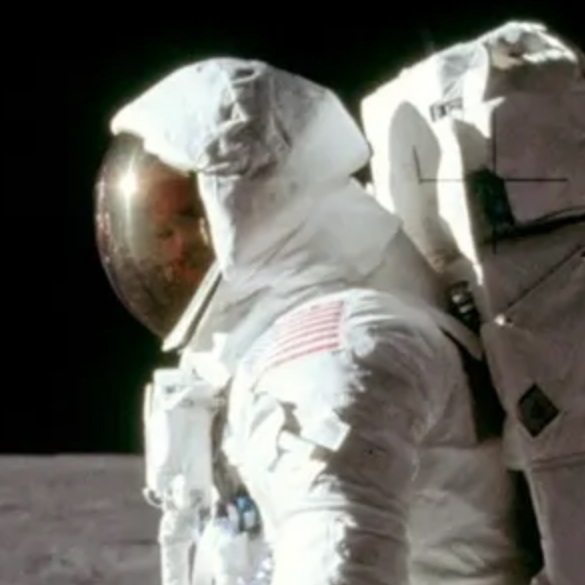 And here’s one more, on the exhilaration of the event.

The sublime Romanticism of the moon landing
Virtually alone among contemporary observers in seeing the true significance of the lunar landing was Vladimir Nabokov, who rented a television set for the occasion. Asked by The New York Times for his reaction, the author of Pale Fire wrote of:

…[T]hat gentle little minuet that despite their awkward suits the two men danced with such grace to the tune of lunar gravity was a lovely sight. It was also a moment when a flag means to one more than a flag usually does. I am puzzled and pained by the fact that the English weeklies ignored the absolutely overwhelming excitement of the adventure, the strange sensual exhilaration of palpating those precious pebbles, of seeing our marbled globe in the black sky, of feeling along one’s spine the shiver and wonder of it. After all, Englishmen should understand that thrill, they who have been the greatest, the purest explorers. Why then drag in such irrelevant matters as wasted dollars and power politics?