What I will always think of as almost Trump’s toilet has made the news again.

Busted flush: Man arrested over theft of solid gold toilet in England
Det Insp Jess Milne said: “The piece of art that has been stolen is a high value toilet made out of gold that was on display at the palace. The artwork has not been recovered at this time, but we are conducting a thorough investigation to find it and bring those responsible to justice.”

That headline-grabbing golden loo was only one of Maurizio Cattelan‘s many not-so-subtle provocations at Blenheim Palace.

Maurizio Cattelan at Blenheim Palace: blisteringly good and as subtle as a solid gold toilet
In his new exhibition featuring a praying Hitler and a felled Pope the artist plays to his strengths: spectacle, scale, shock, subversion. 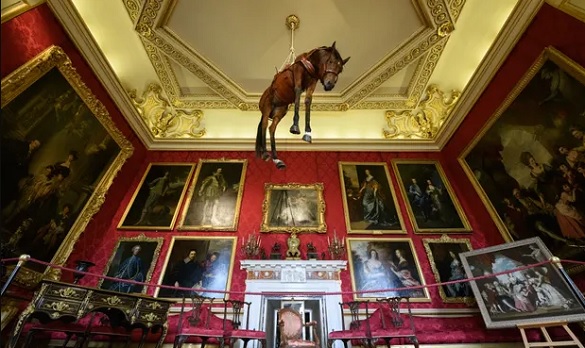 The Art Newspaper have updated their report of the story with photos showing the damage caused by the theft.

‘I wish it was a prank’: Maurizio Cattelan on the surreal theft of his golden toilet
The burglars caused “significant damage and flooding” after removing the toilet, which was plumbed in, at around 4.50am this morning. A 66-year-old man has been arrested in connection with the incident. Thames Valley Police say that a group of offenders used two vehicles during the theft. Commentators on social media fear however that the work may be melted down.