Everyone’s election campaigns are underway now, with the various parties keen to target those voters they think best placed to swing it in their favour. But who are these people these days?

The centre folds – What happened to Britain’s median voter?
Since Brexit sliced through traditional political alliances, politics has become less of a simple matter of left versus right. Parties hammering out manifestos and preparing leaflets for swing seats are thus grappling with “Schrödinger’s median voter”, argues Marcus Roberts, a pollster at YouGov: they are unsure whether this mythical figure is alive or dead.

If Brexit dominates the coming election, the median voter will be no more. When it comes to leaving the European Union, voters have polarised. There is little sign of compromise between the Remain and Leave camps. Fishing in the gap between these two pools of votes will land few votes, points out Chris Prosser of the University of Manchester. When elections are fought on economic issues, between left and right, political parties can pick a point in the middle and not go far wrong. By contrast, “identity politics do not have give and take,” says Geoffrey Evans of Oxford University. It is relatively easy to compromise on, say, the level of tax. It is harder to do so on notions such as sovereignty.

Here’s my simplistic take on this: we need the parties to pick a quadrant.

This is how it used to be; the left, the right, the centre.

Brexit isn’t a left or right thing, it’s in or out.

But because we have another general election, rather than another referendum, we have to think of the latter in terms of the former. 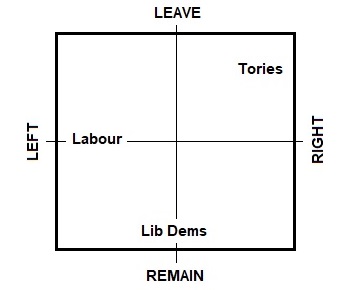 So where does that leave those of us who sit in the bottom-left quadrant?

Tom Watson quits as Labour deputy leader and stands down as MP to ‘start a different kind of life’
The two men clashed repeatedly at the top of the party, with Mr Watson becoming a focus for the ‘moderate’ opposite in the party to Mr Corbyn. He criticised the leadership’s attempts to tackle anti-Semitism in the party and led moves to push it into supporting a second referendum on the EU, despite the entrenched resistance of the leader. Most recently, he defied Mr Corbyn by calling for the party to back a new public vote before the country went to the polls in a general election.