Cyborgs. So much promise, so little follow-through.

Transhumanism is tempting—until you remember Inspector Gadget – Wired
It’s comforting to think of the body as a machine we can trick out. It helps us ignore the strange fleshy aches that come with having a meat cage. It makes a fickle system—one we truly don’t understand—feel conquerable. To admit that the body (and mind that sits within it) might be far more complex than our most delicate, intricate inventions endangers all kinds of things: the medical industrial complex, the wellness industry, countless startups. But it might also open up new doors for better relationships with our bodies too: Disability scholars have long argued that the way we see bodies as “fixable” ultimately serves to further marginalize people who will never have the “standard operating system,” no matter how many times their parts are replaced or tinkered with.

I remember Professor Reading from Warwick University/Professor Warwick from Reading University being the talk of the town back in the 90s, when I was a student researching interactive art.

The Cyborg: Kevin Warwick is the world’s first human-robot hybrid – Vice
This isn’t just for fun: Warwick is certain that without upgrading, humans will someday fall behind the advances of the robots they’re building – or worse. “Someday we’ll switch on that machine, and we won’t be able to switch it off.” That might explain why he has very little technology at home, and counts The Terminator among his biggest influences. He doesn’t want to become a robot; he wants to be a better human.

It got me thinking about Stelarc, the Cypriot/Australian performance artist who visited our campus one day to deliver a must bizarre lecture. He demoed his extra hand and talked about the new ear he was planning on installing/implanting/growing.

For extreme artist Stelarc, body mods hint at humans’ possible future – Wired
He speaks excitedly about potential future applications for the ear. “The ear also might be a kind of distributed Bluetooth system, where if you telephone me on your cellphone, I’ll be able to speak to you through my ear,” Stelarc said. “But because the small speaker and the small receiver would be implanted in a gap between my teeth, I would hear your voice in my head. If I keep my mouth closed, only I hear your voice. If I open my mouth and someone else is close by, they might hear your voice seemingly coming from my mouth. And if I lip-sync, I’d look like some bad foreign movie.” 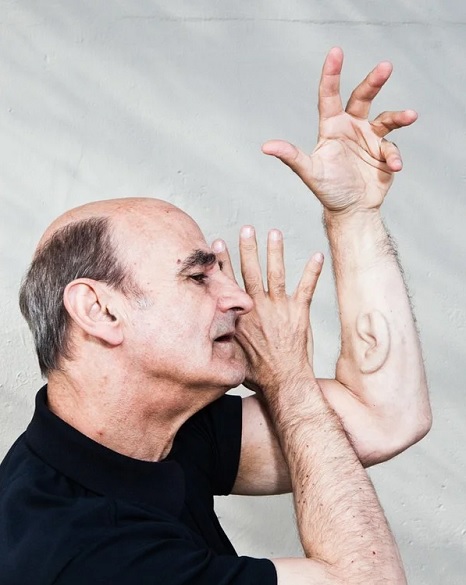 Stelarc — Making art out of the human body – Labiotech
The final procedure will re-implant the microphone, which will be wirelessly connected to the Internet. The goal is to use it to listen in to what’s happening in other places of the world. “The ear is not for me. I’ve got two good ears to hear with,” the artist says. “For example, someone in Venice could listen to what my ear is hearing in Melbourne.” 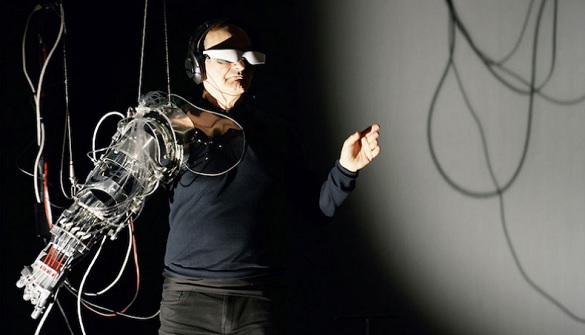 Redefining the human body as “meat, metal and code”: An interview with Stelarc – Sleek Magazine
I left our meeting in awe of a man that, at the age of 71, is still at the foreground of technological art and posthumanist thought. Stelarc was making interactive internet art before the invention of Google (and dare I say it, before I could talk). Decades into his work and exploration of the limits of the human body, Stelarc continues to break and bend our conceptions of what constitutes a body, and fundamentally, what it means to be human. 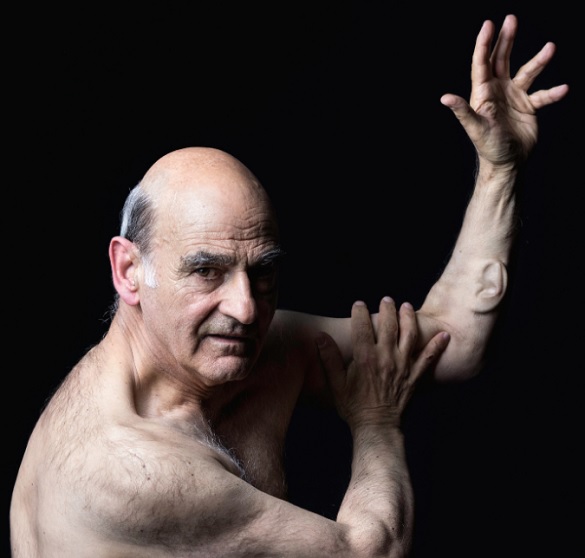 4 thoughts on “Lend him a hand—or an ear”