They come in all shapes and sizes, but they’re all 99 years old today, kind of. 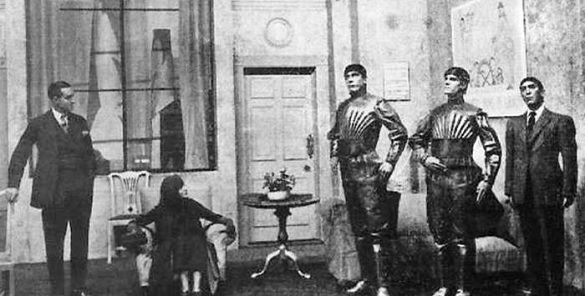 The Czech play that gave us the word ‘Robot’ – The MIT Press Reader
Thus, “R.U.R.,” which gave birth to the robot, was a critique of mechanization and the ways it can dehumanize people. The word itself derives from the Czech word “robota,” or forced labor, as done by serfs. Its Slavic linguistic root, “rab,” means “slave.” The original word for robots more accurately defines androids, then, in that they were neither metallic nor mechanical.

The contrast between robots as mechanical slaves and potentially rebellious destroyers of their human makers echoes Mary Shelley’s “Frankenstein” and helps set the tone for later Western characterizations of robots as slaves straining against their lot, ready to burst out of control. The duality echoes throughout the twentieth century: Terminator, HAL 9000, Blade Runner’s replicants.

Machine Morality and Human Responsibility – The New Atlantis
This year [2011] marks the ninetieth anniversary of the first performance of the play from which we get the term “robot.” The Czech playwright Karel Čapek’s R.U.R. premiered in Prague on January 25, 1921. Physically, Čapek’s robots were not the kind of things to which we now apply the term: they were biological rather than mechanical, and humanlike in appearance. But their behavior should be familiar from its echoes in later science fiction — for Čapek’s robots ultimately bring about the destruction of the human race.

Before R.U.R., artificially created anthropoids, like Frankenstein’s monster or modern versions of the Jewish legend of the golem, might have acted destructively on a small scale; but Čapek seems to have been the first to see robots as an extension of the Industrial Revolution, and hence to grant them a reach capable of global transformation. Though his robots are closer to what we now might call androids, only a pedant would refuse Čapek honors as the father of the robot apocalypse.

I hope someone’s planning a big celebration next year.