Who knows how all this will end, it’s all guesswork. Will the final figures for the UK be between 7,000 and 20,000? Perhaps as high as 66,000? Depends on your model. Can we at least say for certain that this will end at some point? Are things already slowing down?

Three graphs that show a global slowdown in COVID-19 deaths – The Conversation
Other published graphs have shown the number of deaths reported each day for various countries. These are more useful, but the reader is still left trying to discern the extent to which the rise from one day to the next is larger or smaller. The graph below is different. It shows both the number of deaths each day and the rate of change in that number. Most importantly, it uses smoothed data – a moving average from the day before to the day after each date shown.

Here’s something simpler that caught my eye, a way of looking at one of the (positive?) effects of this pandemic.

Traffic data shows how rush hour has all but disappeared in major cities in Britain (and ROW) – Reddit
No more rush hour. Declining vehicle usage in cities across the world means journeys at rush hour are almost as quick as those in the middle of the night. 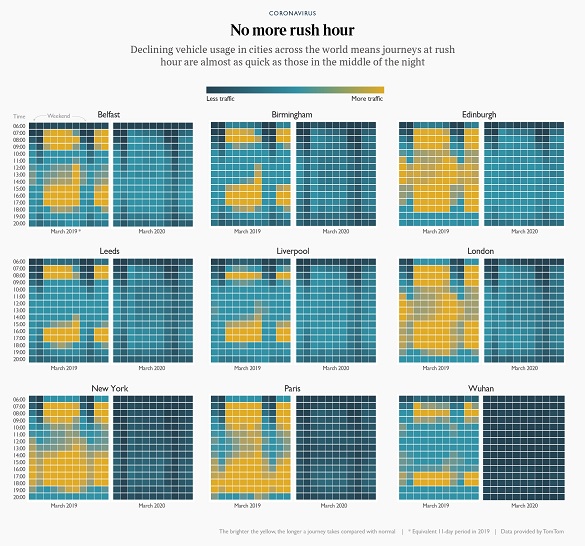