Hosts of Australia’s Today giggle their way through a segment on Jeff Bezos’ weiner-shaped spacecraft – AV Club
Last week, we learned that Dr. Evil cosplayer Jeff Bezos would be leaving for space on a rocket that completes his attempts to fully embody the Austin Powers villain by being shaped like a giant metal penis. The hosts of Australia’s Today morning show were tasked with reporting on this story when it was first announced, and found themselves giggling through the entire segment as images of space dicks were displayed on the green screen behind them.

Tens of thousands sign petition to stop Jeff Bezos from returning to Earth – NPR
On July 20, Amazon’s founder and billionaire magnate Jeff Bezos and his brother Mark will board the New Shepard suborbital rocket system. The Bezos brothers, one auction winner with $28 million to spare, and a fourth person will become the first crew aboard the reusable rocket for its 11-minute voyage to space.

Since Bezos made the announcement about his journey to space this month, tens of thousands of people have come together to petition against his return to the planet.

That guy from Amazon has been out shopping.

Jeff Bezos Sets Record With $165 Million Beverly Hills Home Purchase – Bloomberg
News of the sale emerged just days after filings showed Bezos cashed out $4.1 billion of Amazon shares and comes amid reports that he’s also entered the art market. He reportedly set a record for artist Ed Ruscha at a Christie’s auction with a $52.5 million purchase of “Hurting the Word Radio #2” in November and also bought “Vignette 19” by Kerry James Marshall for $18.5 million.

Jeff Bezos bought the most expensive property in LA with an eighth of a percent of his net worth – The Verge
It is literally impossible to imagine just how rich the wealthiest people on the planet are. The difference between their bank accounts and yours — yes, you, the person reading this — is that they can spend the monthly interest on their holdings and buy things like airplanes and islands. It is probably important to note here that Amazon paid zero dollars in federal income tax on $11 billion in before-tax profit in 2018; this year, it will pay out $162 million on $13.3 billion in profit — a whopping 1.2 percent effective tax rate.

An eighth of a percent? It’s all relative, as this interactive graphic from The Washington Post, very cleverly demonstrates.

What Michael Bloomberg’s $11 million Super Bowl ad would cost you on your budget – Washington Post
Very few of us can comprehend what it’s like to be uber-wealthy like Mike Bloomberg, one of the richest people in the world and a Democratic presidential candidate. For example, the former New York mayor spent $11 million of his own money on a 60-second Super Bowl ad. How much money would that mean to you? Let’s put the finances of the ultra-rich into the context of everyday life. 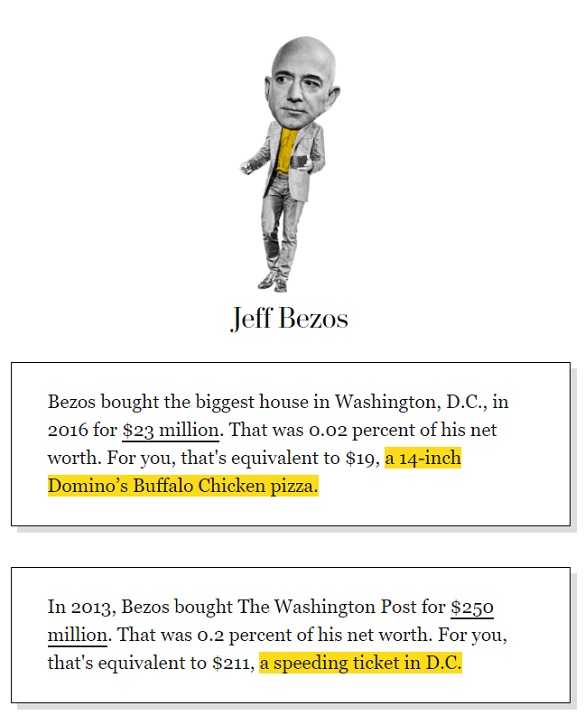 Smart speakers. Smartphones. They, and the world they belong to, feel less and less smart each day.

Underpaid and exhausted: the human cost of your Kindle
In the Chinese city of Hengyang, we find a fatigued, disposable workforce assembling gadgets for Amazon, owned by the world’s richest man. […]

Talk in the factory is of agency workers being laid off without pay during quiet periods: 700 in April and May, and 2,700 in January and February. Yet among the workers there is no great simmering anger, no burning resentment. Few have heard of Amazon or Bezos. They aren’t expecting very much and aren’t particularly disappointed when not very much is exactly what Foxconn and Amazon give them.

It’s crazy to think that they work such long hours for such low pay, without being aware of how much money these companies are making, as a result of their work.

And it’s crazy to think that not joining in with this is now seen as outlandish and controversial.

This is what it’s like to not own a smartphone In 2018
Four years ago, I wrote about having no regrets for being a “dumb phone” user. At the time I was an anomaly: 58% of Americans, according to Pew researchers, owned a smartphone; that figure was around 80% for people in my age demographic. Now, I’m a clear oddity: 77% of U.S. adults are smartphone users, as are around 90% of my peers.

But, oh well. I don’t plan on changing tack anytime soon. Here’s why. …

My life without a smartphone
The problem is, divided out like that, we are left as partially everywhere and fully nowhere. We live with a constant Fear of Missing Out; but in need to fill the moments documenting life and making sure we don’t miss an email or update, we miss out being present in life, a sentiment beautifully illustrated in the viral “I forgot my phone” short film from last year.

I forgot my phone

I wonder if those Foxconn workers have any idea what that video’s on about.

I’m so pleased to see this is making great progress. I’ve been a fan of it since first reading about it in Wired all those years ago, and have been spurred on to re-read the book again.

The Long Now Foundation begins the installation of the monumental 10,000 year clock in West Texas
The clock is designed to run for ten millennia without any required human intervention to keep it going. Inventor Danny Hillis, who came up with the idea of the clock, proposed for it to be “an icon to long-term thinking”. A number of parts are still being fabricated as of this date, but now the 10,000 year clock is getting closer and closer to keeping time for a long time. We’re all excited.

Clock of the Long Now – Installation Begins (Vimeo)
After over a decade of design and fabrication, we have begun installing the first parts of the Clock of the Long Now on site in West Texas. In this video you can see the first elements to be assembled underground, the drive weight, winder and main gearing. This is the first of many stages to be installed, and we continue to fabricate parts for the rest of the Clock in several shops along the west coast.

It’s taken a long time to get to this point though, appropriately enough. This, from 2011.

How to make a clock run for 10,000 years
At first, Hillis and Rose and other members of the foundation figured the organization’s primary job would be building the clock. They even purchased a remote site, in Nevada, which met their geographic, geological and meteorological needs.

But then progress seemed to stop — at least from the outside. Although the Long Now Foundation continued working on prototypes, materials testing, design and other projects, media attention faded after the turn of the millennium. To anyone not part of the project, the clock seemed to have become one of those ideas that are good to think about, but impractical in reality.

Then Bezos and Hillis, already good friends, got to talking.

I wasn’t very keen on this take on it, however, from The Verge.

They keep calling it Bezos’s clock, which makes it sound like a billionaire CEO’s crazy vanity project. Yes he’s heavily invested in it, I get that, but it’s more than that, right?

The Clock of the Long Now (Vimeo)
The Clock of the Long Now is a portrait of Danny Hillis and his brilliant team of inventors, futurists, and engineers as they build The 10,000 Year Clock—a grand, Stone Henge-like monolith, being constructed in a mountain in West Texas. The film, like the clock itself, celebrates the power of long-term thinking and mankind’s insatiable thirst to solve life’s biggest problems.

Happy to put my money where my mouth it. (As I write this, they have 9,142 members currently. I thought about waiting to join till they get to 9,999, but I’m just not that patient.)

Welcome to Miscellaneous Details, an occasional weblog of links on an assortment of topics.