Len Solomon and his amazing DIY musical contraptions – The Kid Should See This
Making instruments can be as simple as adding different amounts of water to a row of bottles or as elaborate as creating your own pipe organ-style instruments from any object that suits a musical vision. That’s what Len Solomon does. For over 30 years, he’s invented instruments by “filing and sawing” parts like “old vacuum cleaner tubes and plastic bottles, hardware supplies like PVC pipes and copper tees, and specialty items he makes himself like rubber squeeze balls and fipples.”

Not that one, but something much jazzier — men, machines, music, all combined perfectly.

And if you like that, you must check out his earlier film, the equally meditative though more meandering Spiegel Van Holland, or Mirror of Holland.

I’m not sure how I’ve failed to share Wintergatan’s Marble Machine video before now. It’s from a few years ago, but I still come back to it and am just as blown away as I was the first time I saw it.

It’s just (just??) a large music box, really, but it made quite an impression, to say the least. And as technically astounding as that is, a new-and-improved version is being built, and musician/designer/engineer Martin Molin has been sharing the journey in some detail. It looks and sounds incredible.

As well as showing us his own work, Martin has filmed his favourite music machines from the Speelklok Museum in Utrecht, in the Netherlands. They’re just as bizarre.

100 year old self-playing violin – “The Eighth Wonder of the World”
This amazing instrument is The Hupfeld Phonoliszt Violina – an Orchestrion with self-playing Violins, Enjoy! 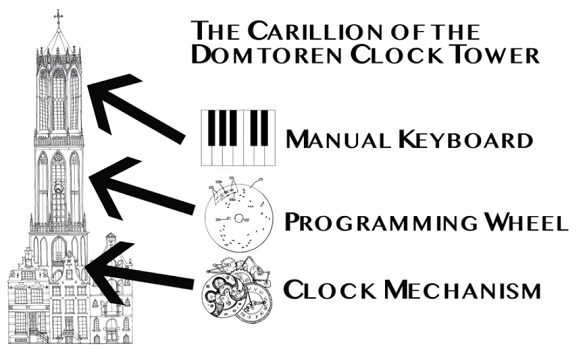 Khoi Vinh uses this wonderful Rube Goldberg video from Joseph Herscher to discuss important points about the value of aesthetics and narrative in good design and engineering.

Valuable lessons from pointless machines
Though the Cake Server relies on precision execution and basic physics and engineering principles, it’s clear from watching the behind-the-scenes video below that there is a real artistry at work, too. In comments that will sound familiar to any designer, Herscher talks about the importance of the viewer’s experience and how certain components of a Rube Goldberg help create a sense of expectation and narrative for the audience.

These machines are ingenious but, as Khoi points out, and as reiterated by Joseph in his behind-the-scenes video, a lot of the joy and humour comes from our own expectations and reactions. Like that off-screen sound at 1:15!

The Cake Server – Joseph’s Most Complex Machine Ever
I hate waiting for dessert, so here’s a Rube Goldberg machine to streamline dinnertime. It lets me keep eating, with no break before cake. It’s my most complex yet and took 3 months to make so I hope you enjoy it!