I don’t remember adding this to my YouTube ‘Watch Later’ playlist, but I’m glad I did. A charming documentary on a bizarre, elegant, yet absolutely enormous cloud.

Secrets of a Strange Cloud – YouTube
This is about the Morning Glory Cloud in the Gulf of Carpentaria, Queensland, Australia. It is an amazing atmospheric phenomenon. It is a shockwave which can be over a thousand kilometres long. Other meteorological terms for this type of formation is a shelf cloud, roll cloud or soliton. They can happen unpredictably in other places in the world but the Gulf of Carpentaria is the only location place where they happen with some degree of regularity around September and October.

Whilst we still have our heads in the clouds, ponder this strange notion — that we didn’t always know where birds went in the winter. They seemed to just vanish each year. Perhaps, rather than flying to different countries, they flew a little further.

When birds migrated to the Moon – The MIT Press Reader
Morton rejected Aristotle’s widely accepted hibernation theory, and pointed out a major flaw in the theory that the birds simply migrated to another place on Earth: No one in Europe knew where they went. They literally disappeared. He argued that returning birds, like woodcocks, appeared to drop suddenly from the sky over ships at sea.

Their round trip to the moon took one month each way, taking the distance to the moon and the length of their absence into account. There was no atmospheric resistance to impede their flight (so he had taken on board that much of Pascal’s conclusions) and the journey between the worlds was aided by lack of gravity. They slept for much of it, living off their body fat. It was all logical enough, in its own way.

You must read that article for its charming account of Domingo Gonsales flying to the Moon on his swan engine.

In 1110, the Moon vanished from the sky. We may finally know why – Science Alert
“On the fifth night in the month of May appeared the Moon shining bright in the evening, and afterwards by little and little its light diminished, so that, as soon as night came, it was so completely extinguished withal, that neither light, nor orb, nor anything at all of it was seen,” an observer wrote in the Peterborough Chronicle.

It was bright enough a week ago, spookily peering through the clouds, though this shot using my binoculars doesn’t do it justice.

Perhaps I need to take some pointers from the experts.

Taking good photos in bad light – Photography Life
When the sky is gray or the sun is directly overhead, it can be tough to find inspiration for high-quality photography. My hope with this article is to share some tips that have worked for me when I photograph in bad lighting conditions – something which every photographer experiences at some point.

Time for another post about trees, I think. Here are a couple of links that have been languishing in my drafts folder for a while.

The photographs documenting its construction are extraordinary.

It reminds me a little of one of my favourite trees at the Yorkshire Sculpture Park.

Ai Weiwei: Iron Tree – Yorkshire Sculpture Park
Iron Tree is the largest and most complex sculpture to date in the artist’s tree series, which he began in 2009. Inspired by the wood sold by street vendors in Jingdezhen, southern China, Iron Tree comprise of 97 tree elements cast in iron and interlocked using a classic – and here exaggerated – Chinese method of joining. Iron Tree expresses Ai’s interest in fragments and the importance of the individual, without which the whole would not exist.

Artificial trees of a different kind, now. OK, so the trees are real, but their glitch-art shapes certainly aren’t natural.

A Japanese forestry technique prunes upper branches to create a tree platform for more sustainable harvests – Colossal
Literally translating to platform cedar, daisugi is a 14th- or 15th-century technique that offers an efficient, sustainable, and visually stunning approach to forestry. The method originated in Kyoto and involves pruning the branches of Kitayama cedar so that the remaining shoots grow straight upward from a platform. Rather than harvesting the entire tree for lumber, loggers can fell just the upper portions, leaving the base and root structure intact.

Perhaps they got too close to Paul Trillo’s black hole?

It wasn’t all bad.

The of the year articles seem a little early this year. I wonder why we’re so keen to get 2020 behind us.

2020’s weather photography of the year doesn’t disappoint – Moss and Fog
The Royal Meteorological Society Weather Photographer of the Year contest is now in its 5th year, and has some amazing entrants that show us 2020 wasn’t just about a raging global pandemic. Indeed, Mother Nature, combined with a rapidly warming planet has resulted in record storms, floods, droughts, and wildfires this year.

Top shots from the 2020 International Landscape Photographer of the Year – The Atlantic
More than 3,800 entries were received in this year’s landscape-photography competition, from professional and amateur photographers around the world.

There are many more beautiful images on those pages, do check them out. And here are some more wonderful things of a different kind.

100 best inventions of 2020 – TIME
Every year, TIME highlights inventions that are making the world better, smarter and even a bit more fun. … 100 groundbreaking inventions—including a smarter beehive, a greener tube of toothpaste, and technology that could catalyze a COVID-19 vaccine—that are changing the way we live, work, play and think about what’s possible.

For all we moan about the weather, it’s endlessly fascinating. Clouds, especially. Here’s one, wandering over a lake in Austria.

Here’s an interesting question to ponder after watching that.

How much does a cloud weigh? – The Conversation
Summer cumulus clouds vary in size, but a typical one would be about one kilometre across and about the same tall. This means we can consider it to be a cube, with each side measuring 1km across. That means our cloud is 1,000 x 1,000 x 1,000 cubic metres in size – and this makes 1 billion cubic metres. Our cloud had only a quarter of a gram of water per cubic metre, but that’s going to work out as rather a lot now there’s a billion of them. The weight of the water in the cumulus cloud is 250,000,000 grams – 250 tonnes. This is about the same as two adult blue whales.

Looking for the next cloudburst? Perhaps start here.

Those maps (especially the vector map version) make you realise just how tumultuous and highly charged this globe of ours is — which isn’t the impression you get when looking down on Google Earth. “In prioritizing clarity and smoothness in its representation, Google Earth supports how we are consuming the planet.”

Springtime everywhere – Real Life
As Covid-19 lockdowns were shuttering citizens indoors in April, for instance, Google Earth seized on the opportunity to launch a slew of themed virtual tours (e.g. the National Parks of the United States tour). It made Google Earth accessible in all browsers and added 2,500 new images to Earth View, a spinoff showcasing surreal and awe-inspiring landscapes from above. For all the feeling that Google Earth’s could be a helpful resource for learning about the climate crisis, its interface of zooming in and out and around the globe seamlessly in high-definition undermines its potential. The form comes to contradict the content: We may revel in the beauty and awesomeness of seeing the earth from the sky — and our ability to freely manipulate this view — despite the crises the imagery may depict. Deforestation on a devastating scale can take on the same aesthetic as any other “virtual holiday” on Google Earth.

Find yourself staring out of windows? Try some different ones.

WindowSwap lets you cycle through picturesque views from all over the world – The Verge
There’s something very positive about the experience. Strangers are taking their time to share their favorite watching spot to help those who might not have one (or are just tired of their own). It is a small gesture of kindness and reminder of the positive ways the internet can make the world feel smaller.

As I mentioned before, one of the benefits of working from home is I get to enjoy the view of our little bird feeder all day. I’ll be back in the office at some point, I’m sure, but I know which website to turn to when I get there.

Bird Library, where the need to feed meets the need to read
Welcome to the Bird Library, feeding the birdbrains of Virginia. Concerned about bird literacy? So are we. We believe in biodiversity and welcome birds of all colors, shapes, and species … even squirrels.

Its live video feed is the only way I’ll get to see cardinals, I think, and all the library’s other exotic (to us in the UK, at least) patrons.

But if you’re wanting to see some truly beautiful birds:

Fantastical images of birds from the 2020 Audubon Photography Award – Hyperallergic
The National Audubon Society annually rewards excellence in nature photography; the 2020 winners offer a stunning array of aviary photographs that continue to amaze with their vivid colors and curious behaviors.

This hypnotic artwork from Andy Thomas is my favourite, I think. I’ve seen visualisations of bird flight before, but not their song. These reinterpretations of bird song take very strange and dramatic forms reminiscent of flowers, insects and the birds themselves.

Digital sculptures visualize chirps of Amazonian birds in a responsive artwork by Andy Thomas – Colossal
Based on an audio recording from a 2016 trip to the Amazon, Australian artist Andy Thomas interprets birds’ trills, squawks, and coos through an animated series of digital sculptures. … With each chirp, the fleeting masses contort, grow, and disassemble into a new, vibrant form.

Instead of a window I could happily have this playing on a loop all day on a monitor on a wall or something. I wonder what the sparrows and goldfinches on my bird feeder would make of that.

A cloud gazer’s guide to every fluffy thing in the sky – Atlas Obscura
Cloud-gazing, Pretor-Pinney says, is a way of “being an explorer of the sky, where you don’t have to leave your lockdown space.” The only souvenirs you’ll have will be photos and memories, but in a lonely, uncertain time, it helps to have a little perspective. 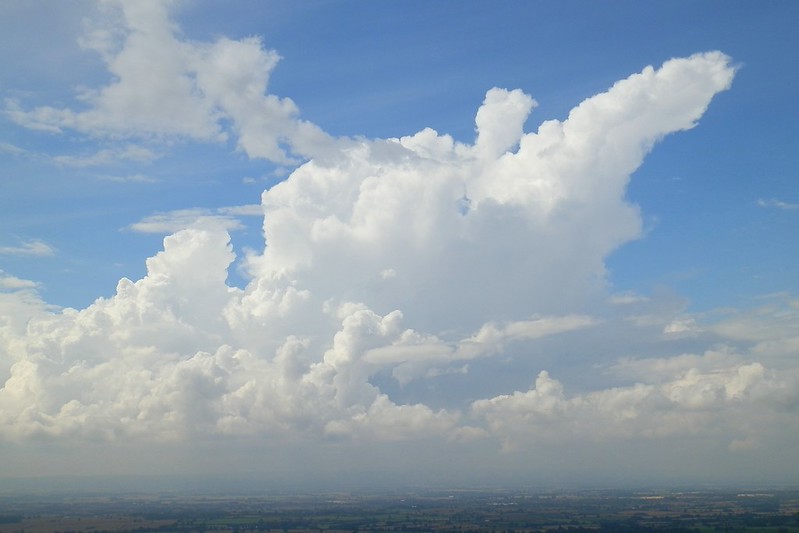 Spy hummingbird captures footage of a Monarch butterfly swarm as they magnificently take to the sky – Laughing Squid
In an absolutely breathtaking clip from the PBS series Spy in the Wild, a mechanical hummingbird approaches a swarm of sleeping Monarch butterflies absorbing the warm sun of the Mexican mountains. As they wake from their sun-soaked slumber, they begin investigating their mechanical visitor.