Great to see some more work from this most patient of photographers.

“Crowded Fields” by photographer Pelle Cass
“I’m still fascinated by the body in motion and the strangeness of time (although I’m sick of watching college sports!). To make the compositions, I put my camera on a tripod, take up to a thousand pictures, and compile selected figures into a final photograph that is kind of a still time-lapse. I change nothing — not a pixel. I simply select what to keep and what to omit. It all happened precisely as you see it, just not at the same time.”

Pelle Cass must have the patience of a saint—not because of the number of photos he takes, but what must be involved in stitching them all together.

The dizzying patterns of movement at athletic events captured in composite photographs by Pelle Cass
Although the images are highly manipulated, with over five hundred Photoshop layers involved, Cass notes that each and every figure remains in the original location and position that they were in at the time the photo was taken. His compositional effort is to understand and convey the visual story that unfolded over the course of the sporting event. The artist explains to Colossal, “I scroll up and down, over and over looking for figures I think are interesting. It’s a little like slow-motion Tetris, trying to fit various shapes into various spaces. Then, with luck, a set of coincidences or a kind of gesture or spatial idea begins to emerge.” 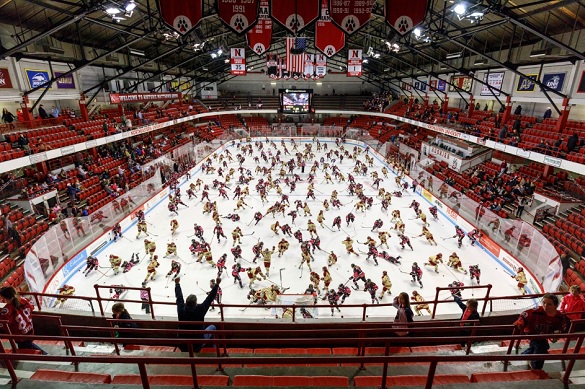 Some of Pelle Cass’s images were used in Nicholas Felton’s Photoviz infographics book.

But compare those images with these from South Korea. A similar feel but without any digital manipulation.

Seung-Gu Kim creates Lowry-style photographs of South Korean holidays
Having documented the Korean relationship to the water, as well as recent trends in Korean housing – which sees cities recreating mountains within apartment complexes – one of Seung-Gu’s most recent series focussing on the irony of South Korean holidays, particularly caught our eye. Titled Better Days the series depicts how, as Koreans work extraordinarily long hours, when it comes to going on holiday, they often don’t have the time to travel very far. As a result, leisure parks and entertainment multiplexes have cropped up all over Seoul’s suburbs.