From The Art Newspaper, news of a cupid’s return.

Hidden Cupid resurfaces in one of Vermeer’s best-known works after two and a half centuries
On the original canvas, the Cupid “picture within a picture” hung on the wall behind the letter-reading girl. It was detected 40 years ago by x-ray, but scholars had always assumed that Vermeer himself painted over it, says Uta Neidhardt, the senior conservator at Dresden’s Gemäldegalerie. The decision to restore Cupid to the work was taken after recent laboratory tests established beyond doubt that the figure was overpainted decades after Vermeer completed it.

“There was even a layer of dirt above the original varnish on the Cupid, showing the painting had been in its original state for decades,” Neidhardt says. The overpainting was also slightly darker than the colour used by Vermeer in the background of his work, because the later artist needed to compensate for the darkening varnish on the original, she says.

“This is the most sensational experience of my career,” she says. “It makes it a different painting.” 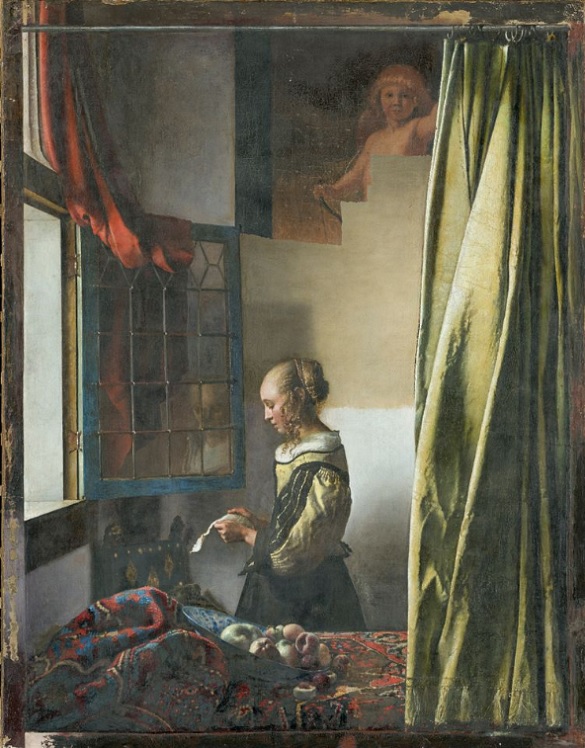 As well as restoring the painting, quite a number of art theory re-writes are required now, I think.

Girl Reading a Letter at an Open Window by Johannes Vermeer
We know from x-rays images that on the background wall, just above and to the right of the young woman, Vermeer had included a large-scale ebony-framed painting of Cupid (the same one that appears in A Lady Standing at a Virginal). It was later painted it out by the artist himself.

The Cupid would have made it clear that the content of the young woman’s letter was of an amorous nature.